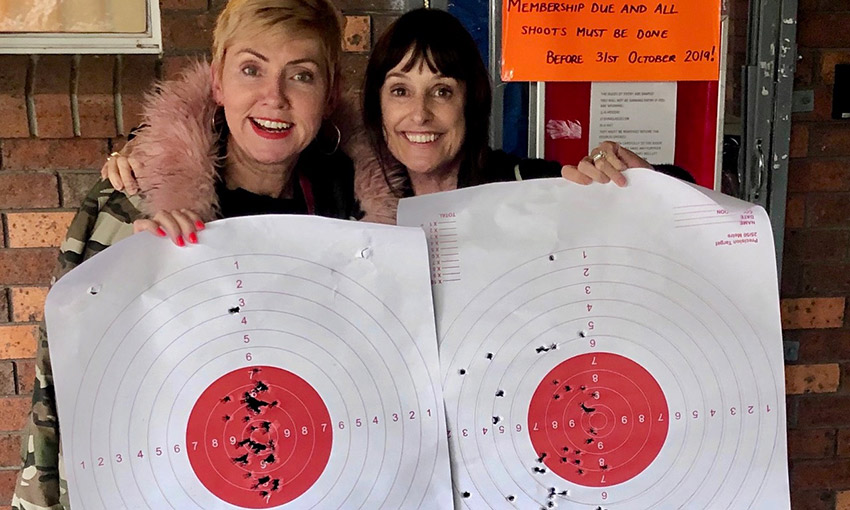 My field trip to the Condell Park Indoor Firearms Range

While I was writing The Second Son, I realised my main female character, Amy Novak, needed a gun, which meant she needed to know how to use it. Yep, it’s that kind of book. Rival gangs at war on the hot and grimy streets of Sydney. Action, guns, murder and a fair bit of mayhem. But just because Amy came from a good home doesn’t mean she needs to be defenceless. And when the book is made into a movie (one can dream) a gun in the hands of a beautiful woman adds an extra frisson of danger. I called up my friend Maz Farrelly and asked her if she wanted to come with me to shooting school. Now Maz is known as one of the most successful TV producers of all time, working in the UK, USA and Australia. She bought Big Brother to Australia and stayed to make Q&A, The X Factor, Celebrity Apprentice and Dancing with the Stars. She has some incredible dinner-party stories. She is The Boss Lady and incredibly busy, but she dropped everything because she’s that kind of friend. We made the 30-kilometre trek from inner-city Sydney out to the Condell Park Indoor Firearms Range so I could write a scene about Amy learning to shoot a gun. The scene in The Second Son where Amy describes her first lesson at the firearms range is very close to my own experience: the two-phase entry, the ballerina-pink spiderweb nail art on the blonde behind the counter, and the guns, and the shooting. When I wrote that scene I gave Amy all the fear I had when I realised the men on either side of me, holding guns full of live ammo, could turn around and shoot me in the head at any moment. I had never held a gun before and found it very confronting and downright scary. I passed that feeling on to Amy, who shares some of my fears but is always much braver than I am. After I’d squeezed the trigger for the first time, I realised I had a major impediment: I was shaking. But the real problems were my monovision and a winking issue. My right eye has been lasered for long-distance vision and my left eye is slightly short-sighted, so it functions as my reading eye. Fortunately, my brain works out which eye to use, depending on the situation. But you can only use one eye at a time when you’re shooting a gun, and I can only wink with my left eye. Using my right eye meant the target was clear but the gun was blurry. Using my left eye, I could line up the gun sites. But I had to use one hand to shut my right eye and you need both hands on the gun. I thought about asking for a patch! After an embarrassing number of shots failed to hit the target, I tried a more lateral approach, turning my head 45 degrees to the right. This effectively put my left eye in charge as my right eye considered my nose. Now I could see the gun and line up the sights. The target was a blurry red thing in the distance, but my next shot went straight through the middle of it. Finally, I could pretend to be Amy for just a moment.

‘If she misses your heart, she’s gonna clean you up with a head shot.’

Then Maz Farrelly stepped up to the plate and nailed it. I might have known she was a bullseye kind of girl. Hysterical. Have a look at our paper targets. Don’t make Maz angry because she will be able to kill you. As the fictional instructor at the shooting range says, ‘Don’t get on the wrong side of this one. If she misses your heart, she’s gonna clean you up with a head shot.’ In the book, the fictional instructor is talking about Amy. In reality, our instructor was talking about Maz. Weaving slightly as though drunk, we made it back to my car, feeling like we’d survived a train wreck. We talked at the top of our voices all the way home, full of adrenaline and chutzpah. After a stiff drink, I was back at my desk writing Amy’s scene, the smell of gunsmoke still in my hair. By sharing this memory, I am not advocating guns in any way. They should be left in the hands of the guys and gals wearing white hats in cowboy movies.